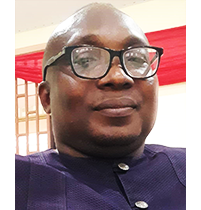 Bruno Yammeluan Ikuli is a Senior Lecturer and Director of the Institute of Foundation Studies (IFS), Federal University Otuoke. He is a priest of the Catholic Diocese of Bomadi. Bruno Ikuli holds a Doctor of Philosophy (Ph.D) in Social and Political Philosophy of the University of Nsukka. He is a Fellow of the Society for Research and Academic Excellence (FSRAE); Member, Political Philosophers’ Association of Nigeria (MPPAN); Member, Researchers International Network (MRIN); and, Member, Faculties of Arts/Humanities Scholars Association of Nigerian Universities (MFAHSANU). Before joining Academics in 2012, he served as Cathedral Administrator of Our Lady of the Waters Cathedral, 2000 – 2001, Chaplain, Catholic Biblical Instructors’ Union, 2001 -, Pioneer Director of Education of the Diocesan Education Directorate, 2009 – 2010; Director, Directorate of Social Communications, 2001 – 2006; Coordinator, Justice, Development and Peace Commission, 2001 – 2006, among other offices. Dr. Bruno Ikuli, who has also served as coordinator of GES is an Internal Member of the University Governing Council representing Congregation (Academics). Until his appointment as Director of the IFS, he was the Coordinator of the General Education Studies (GES) of the University.