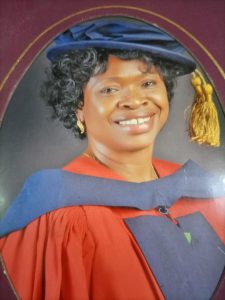 Dr. Helen Opigo holds an HND in Computer studies from the Polytechnic of the South Bank, London, UK now South Bank University. A Master in Business Administration degree with specialization in Management from the Rivers State University of Science and Technology , Nkpolo, Port Harcourt; now Rivers State University and a Doctor of Philosophy (PHD) in Business Policy from the same University. Dr. Opigo has worked with the River State Ministry of Finance in the Treasury Division as a Computer Programmer/Analyst. She also worked in the same capacity with the Computer Center at the Rivers State University of Science and Technology. Whilst at the University she taught system to final year Management students. Her services were later transferred to Administration where she rose to Assistant Registrar before leaving to seek greener pastures at the Shell Petroleum Development Company as Manager of the prestigious Shell Club in Port Harcourt. She later transferred to mainstream Shell as Senior Government Relations Adviser on Bayelsa State appointed her Managing Director of one of their Agricultural Companies, Creek Foods Supply Company Limited. In that capacity she was responsible for the sale of produce from other Agricultural companies, Bayelsa Palm, Bayelsa Sea Foods and Bayelsa Farms till 2012. Currently she is a Senior Lecturer at the Federal University Otuoke, where she is Ag. Director Entrepreneurship. Prior to this position she was the Ag. Head of Department Entrepreneurship and Marketing she has two daughters Babbie Belemo Opigo aand Karen Opigo both Lawyers working in Lagos Nigeria and Dar es Salaam Tanzania respectively.