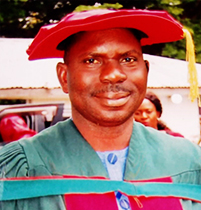 Mr. Godfrey Friday Opuene is an independent minded personality who seeks to add value, a great motivator with strong passion for success. He works relentlessly to achieve set goals with every sense of responsibility. Mr. Godfrey holds a Bachelor degree in Accounting (BSc Accounting) a seasoned professional banker. An Associate of the Chartered Institute of Bankers of Nigeria (ACIB). Also a Certified National Accountant (CNA), Member, Association of National Accountants of Nigeria.
Mr. Opuene’s working career started in Lagos with Savannah Bank as a clerk. He spent Seven years in the bank from 1990 – 1996. In January 1997 Opuene joined Inland Bank and moved to Bauchi. From Bauchi he moved to Abuja as a result of the relocation of the bank’s head office from Bauchi. Inland bank later became Fin-Bank in January 2006 due to the bank consolidation exercise in 2005/2006. Mr. Opuene worked with the newly formed Fin-bank for four years. (January 2006 – 2009 December). During his working experience in the various banks he attended so many training programs at the managerial level.
Until his resignation from Fin-Bank in December 2009, He was a Manager in the bank; Group Head, State Collections. Opuene resigned due to persistent huge deposit targets and joined Hydro-group Ltd, Minna, Niger state as the chief Accountant of the group; his movement from Savannah Bank to Inland bank in 1997 was motivated by the desire of the then management of Inland bank to hire his services in setting up the inter-branch account reconciliation system for the bank. While in Inland bank, he facilitated in the bank’s training School on inter-branch Account reconciliation system.
In Fin-bank, he equally developed training slides on the various taxes and made weekly training sessions via the intranet and visited branches to do the same so as to motivate staff for greater achievements when he became the head of collections unit in Abuja. Almost all through his years in the bank he worked in the Head Office Accounts Department where the consolidated accounts of the bank were prepared in which he participated actively. This placed him in a privileged position. Until He assumed duty in Federal University Otuoke on the 22nd of October 2012, Opuene Godfrey Friday worked as a senior management consultant with an Abuja based management consulting firm; Dunyi Management Consultants Ltd, from January 2011 to September 2012 which offered training and human capacity building services to various organizations, both private and public sector organizations. These activities gave Opuene the privilege to collaborate with the Centre for Management Development (CMD) in Lagos on various training programs carried out by Dunyi Management Consultants Ltd.